Exploration and Conversation about Harlem Duet, a modern prequel to  Shakespeare’s Othello

Be witness to a unique collaboration to explore the meaning and relevance of the contemporary Canadian play, Harlem Duet, including its relationship to Shakespeare’s Othello. The play’s author, Djanet Sears is joined by renowned US Shakespeare scholar Ayanna Thompson and a trio of noted Canadian actors: Walter Borden, Virgilia Griffiths and André Sills, in a 75-minute multimedia live-streamed presentation hosted by Bard on the Beach.

This virtual event is free to attend, but pre-registration is required as attendance is limited. You can register here.

Harlem Duet is now available as an ebook in addition to the print book.

A online reading featuring some of the original cast from the premiere in 1997. Written by David Young, directed by Richard Rose.

The first installment of a series of videos of Chris Gatchalian  reading the work of selected poets. There’s no real rhyme or reason to the selections other than Chris’s love for their work.

Chris Earle’s award-winning dark comedy about an actor whose conscience betrays him in the studio returns for one night only as part of #CanadaPerforms! Directed by Shari Hollett and featuring Sam Earle. “Witty and barbed” – Toronto Star, “A 21st Century Willy Loman… powerful tale of betrayal and deceit” The New York Times.

Dave Deveau as his drag alterego will read from the three plays in his new collection CISSY: Three Gender Plays (Talonbooks), including Nelly Boy (Zee Zee, 2009), My Funny Valentine (Zee Zee, 2011/2013/2018), and Ladies and Gentlemen, Boys and Girls (Roseneath Theatre, 2018). In between readings expect performances and anecdotes from Peach herself, a candid hour with a playwright/drag queen live from her basement dressing room. Part reading, part drag show, all heart.

Sally Stubbs will do a livestream reading from Our Ghosts as part of the National Centre for Arts’ #CanadaPerforms series.

Experience the very freshest work from some of the today’s most exciting playwrights! Pour yourself a drink and join Beverley Cooper (The Lonely Diner, Janet Wilson Meets the Queen, If Truth Be Told), Judith Thompson (White Biting Dog, The Other Side of the Dark, Palace of the End), and Carole Fréchette (The Four Lives of Marie, The Seven Days of Simon Labrosse, Helen’s Necklace), read excerpts from their newest work. The event will be hosted by Weyni Mengesha, Frank Cox-O’Connell, and Guillermo Verdecchia.

Anna Chatterton will do a livestream reading from Quiver as part of the National Centre for Arts’ #CanadaPerforms series.

Mary Vingoe will do a livestream reading from Some Blow Flutes as part of the National Centre for Arts’ #CanadaPerforms series. Donations to help support the Eastern Front Theatre will be accepted.

Inspired by a quote from the I Ching about how we respond to tragedy – “Some weep, some blow upon flutes” – Mary Vingoe’s play is the story of Costas, an elderly Greek shoe repairman whose wife Elena suffers from dementia and whose marriage has been eroded by a family secret. Costas is in denial of his wife’s illness, but Lia, their teenage granddaughter who cares for her grandmother, is not. Costas’ life is altered when Sandra, a professional organizer who cannot begin to organize her own life, enters his shop. An unlikely, at times humorous friendship develops between the two – until we discover that Sandra’s estranged daughter Marijke is fourteen and pregnant. A chance meeting between Elena and Marijke leads to an unravelling of past lives and buried grievances which play out with unexpected results. Some Blow Flutes brings the issue of dementia into the open and explores the possibility of compassion and redemption in the face of overwhelming odds. 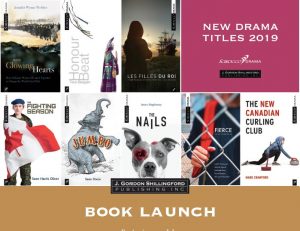 Sheilla Jones and Sheila North
launching
Let the People Speak: Oppression in a Time of Reconciliation

Over the past fifty years, Canada’s Indigenous Affairs department (now two departments with more than 30 federal co-delivery partners) has mushroomed into a “super-province” delivering birth-to-death programs and services to First Nations, Inuit and Métis people. This vast entity has jurisdictional reach over 90% of Canada’s landscape, and an annual budget of some $20 billion. Yet Indigenous people have no means to hold this “super-province” accountable to them. Not a single person in this entity has been elected by Indigenous people to represent their interests. Not one. When it comes to federal Indigenous policy, ordinary Indigenous people in Canada are voiceless and powerless.

In Let the People Speak, author and journalist Sheilla Jones raises an important question: are the well-documented social inequities in Indigenous communities—high levels of poverty, suicide, incarceration, children in care, family violence—the symptoms of this long-standing, institutionalized powerlessness? If so, the solution lies in empowerment. And the means of empowerment is already embedded in the historic treaties. Jones argues that there can be meaningful reconciliation only when ordinary Indigenous Canadians are finally empowered to make their voices heard, and ordinary non-Indigenous Canadians can join with them to advance a shared future.

McNally Robinson Booksellers & The Muses’ Company
are pleased to present

Singer, songwriter and musician, Scott Nolan’s debut poetry collection Moon Was a Feather reflects on a life well-considered. Poems that chronicle a difficult youth, experience with drugs, friendships, and music are interwoven with insights gleaned from the eclectic jumble of neighbourhoods and people he encounters on his long walks. Spare – eloquent with a healthy dose of grit – the poems of Moon Was a Feather are infused with the poet’s deep appreciation for the eccentricities of fate that life throws at him, and the love for music that helps him make sense of them.

Scott Nolan is a songwriter, poet, multi-instrumentalist from Winnipeg, Manitoba Treaty One territory, with nine albums to his credit. His songs have been recorded by Hayes Carll, Mary Gauthier, Watermelon Slim, and Corin Raymond, among others. Long an avid reader of poetry, Nolan turned to writing it in 2015, when he started walking ten kilometres a day in a bid to quit smoking. Nolan discovered melodies and rhythms in the shuffling of his feet, and began writing short poems inspired by reflections on his own difficult past, as well as about people and places in his neighbourhood.

The Ex-Boyfriend Yard Sale: A Play About the Cost of Love

The Orchard (After Chekhov)

Your cart is empty.