McNally Robinson Booksellers & The Muses’ Company
are pleased to present

Singer, songwriter and musician, Scott Nolan’s debut poetry collection Moon Was a Feather reflects on a life well-considered. Poems that chronicle a difficult youth, experience with drugs, friendships, and music are interwoven with insights gleaned from the eclectic jumble of neighbourhoods and people he encounters on his long walks. Spare – eloquent with a healthy dose of grit – the poems of Moon Was a Feather are infused with the poet’s deep appreciation for the eccentricities of fate that life throws at him, and the love for music that helps him make sense of them.

Scott Nolan is a songwriter, poet, multi-instrumentalist from Winnipeg, Manitoba Treaty One territory, with nine albums to his credit. His songs have been recorded by Hayes Carll, Mary Gauthier, Watermelon Slim, and Corin Raymond, among others. Long an avid reader of poetry, Nolan turned to writing it in 2015, when he started walking ten kilometres a day in a bid to quit smoking. Nolan discovered melodies and rhythms in the shuffling of his feet, and began writing short poems inspired by reflections on his own difficult past, as well as about people and places in his neighbourhood.

When the “Kirkland Lake gals of 1941” begin to share their story with a present-day audience, a siren sounds and they soon find themselves pulled right back into the fateful winter of 1941–42. There, they gather again at the mine-head, waiting for word on the men trapped underground, as their fear and rage builds. When the husband of one of the women is badly injured, their desire to help her quickly leads them into a much larger campaign to help all the families they can. Before long, they’ve become the heart and soul of a large-scale union-organizing drive that is fuelled by their sheer will—and sometimes giddy enthusiasm—but that is also put to the test by their own inexperience, a bitter strike, and the brutal force of the powers that be.

Ally and Josh spend every summer with their father as he goes from small town to small town, working for a construction company in America. But this summer is different. This is the summer they grow up.

Sean Harris Oliver’s The Fighting Season is a searing investigation into the Afghan War through the eyes of a Canadian field medic (Kristy), an OR surgeon (Terry), and a recovery room nurse (Karine). When all three medical professionals experience a life-changing event in the operating room of the NATO-controlled Role 3 Multinational Medical Unit at Kandahar Airfield, they are sent back to Canada for further evaluation. Through Kristy, Terry and Karine’s interwoven monologues we begin to understand the contribution that Canada’s medical teams made in Afghanistan, as well as the devastating impact that war has on the ones charged with saving lives.

Two grown sisters face off over their mother’s death-bed. Together they confront one another, their own identities, and what will remain when their mom leaves this world. A contemporary look at the significance of faith and family, Honour Beat explores the stories this Indigenous family has told itself through the years, as their mother’s youthful spirit leads them toward forgiveness.

Evolving from a routine of long walks he began to help him quit smoking, Winnipeg singer, songwriter and musician Scott Nolan’s debut poetry collection Moon Was a Feather reflects on a life well-considered. Poems that chronicle a difficult youth, experience with drugs, friendships, and music are interwoven with insights gleaned from the eclectic jumble of neighbourhoods and people he encounters on his long walks. Spare—eloquent with a healthy dose of grit—the poems of Moon Was a Feather are infused with the poet’s deep appreciation for the eccentricities of fate that life throws at him, and the love for music that helps him make sense of them.

In Better Angels: A Parable, Akosua Mansa leaves Ghana to work for Greg and Leila Tate in the tony suburbs of a metropolitan city. But she soon finds herself in an impossible situation: like more than forty million people, she’s become trapped in modern-day slavery. Taking cues from the spider god, Anansi, Akosua will take her destiny into her own hands.

Eating Pomegranates Naked examines two couples and their single frenemy as they scratch the surface of their relationships over too much wine. What do infertility, religion, toxoplasmosis, and ice-cream have to do with Tulipmania? Maybe more than you think.

Moishe Yukle Bernstein was a poor pedlar who bought land near Pontypool, Ontario, a tiny Protestant town outside Toronto. The spot became a summer getaway for Jewish garment workers from Kensington Market—and for six decades, families made their way to the small village, where they shared dreams, memories, and a pathetic waterfront. With a vast array of characters, songs, and a healthy dose of humour, The Right Road to Pontypool is a unique and moving depiction of the Jewish experience in Canada.

Janet Wilson Meets the Queen begins in Vancouver, 1969, as society is undergoing profound change. Janet, a woman who places great faith in the British monarchy and its traditions, is valiantly trying to hold together her dysfunctional family: her teenaged daughter, Lilibet; her aging mother, “Granny,” and her husband, Jim. When Janet’s nephew from San Francisco arrives on her doorstep looking for refuge from the Vietnam War draft, the family grapples with what to do. While the people she cares for are irrevocably affected by the changing political landscape, Janet Wilson struggles for equilibrium, attempting to hold on to a world that refuses to stay still.

Deep in Simon’s basement, there is a secret world of imagination and adventure. When his new friend Abby comes over after school to work on a class assignment, Simon steers their work toward creating a play. However, Simon’s older brother, Zach, is uneasy with their play-acting and dressing up…because, as he reveals to Abby, Simon wishes to be a girl.

As the three characters struggle through their conflicts, they improvise a fairy tale about a magic prince, an evil king, a brave young girl, and a fire-breathing dragon who’s getting more real by the minute. Can Abigail save Princess Simone from the Tower of Light? Will Zach succeed in turning his brother back into being a boy once and for all? And will Simon overcome fear and finally become their true self? Boys, Girls, and Other Mythological Creatures is a thoughtful and hilarious new play about our ability to transform.

The Seat Next to the King by Steven Elliott Jackson was chosen as one of the choices for Outstanding New Work by My Entertainment World.

In Care by Kenneth T. Williams has been nominated for the Rasmussen, Rasmussen & Charowsky Indigenous Peoples’ Writing Award at the Saskatchewan Book Awards.

With Love and a Major Organ by Julia Lederer has been nominated for the 2017 Los Angeles Theatre Critics Award for Best Production for the production at Boston Court Theatre.

Children of God
a musical by Corey Payette
available March 2018

Children of God is a powerful musical about an Oji-Cree family whose children are taken away to a residential school in Northern Ontario. Julia and Tommy struggle to survive in the harsh environment of a religious school that is determined to rob them of their identities while their mother, Rita, never stops trying to get them back. The impact of this experience on the lives of all of them is profound and devastating, yet the story moves toward redemption. Children of God offers a thrilling blend of ancient traditions and contemporary realities, celebrating resilience and the power of the Indigenous cultural spirit.

One moment, Mona’s father is teaching her to make pasta sauce at 2 AM—and the next, she sits beside him in a hospital room, counting the seconds between beeps. When a curiously familiar barefooted boy runs in, carrying a blue umbrella and singing a song she’s heard somewhere before, the rain begins. And Mona goes on a journey forward to the past. Steeped in legend and lore, Oregano is a family play about accepting the past in order to embrace the future—teaching us that sometimes, the truth can be exactly what we imagine it to be.

As a condition of his parole, Darren has been ordered by the court to live with his father, Wally, on the rez. The two have always had a contentious relationship: Wally is a problem drinker, and Darren’s got a short fuse. But Wally tells his son that he’s stopped drinking and started going to ceremony, and urges Darren to do the same. As old family secrets start to be revealed, the father and son grapple with complex issues.

Popcorn Elder is a drama with many layers. It examines the issue of “plastic shamans” who offer spirituality at a price. It looks at a community working to face its demons and heal past trauma. And at the heart of the play is the story of a father and son who are seeking connection and reconciliation. Through flashbacks, a combination of Cree and English, and an unforgettable cast of characters, Popcorn Elder tells the story of one family’s journey toward hope.

In 1964, a white man walks into a public restroom in a Washington, DC park looking for sex. The next man who enters is a black man.

In what seems at first to be a simple encounter, The Seat Next to the King explores the lives of two men from the pages of history who literally sat next to the most powerful men in America—Bayard Rustin, a friend to Martin Luther King Jr. who organized the March on Washington, and Walter Jenkins, top aide and friend to President Lyndon Johnson. An exploration of sexuality, race, and masculinity, The Seat Next to the King imagines a meeting between two men, burdened by their prejudices and inner conflicts, as they attempt to find a connection. 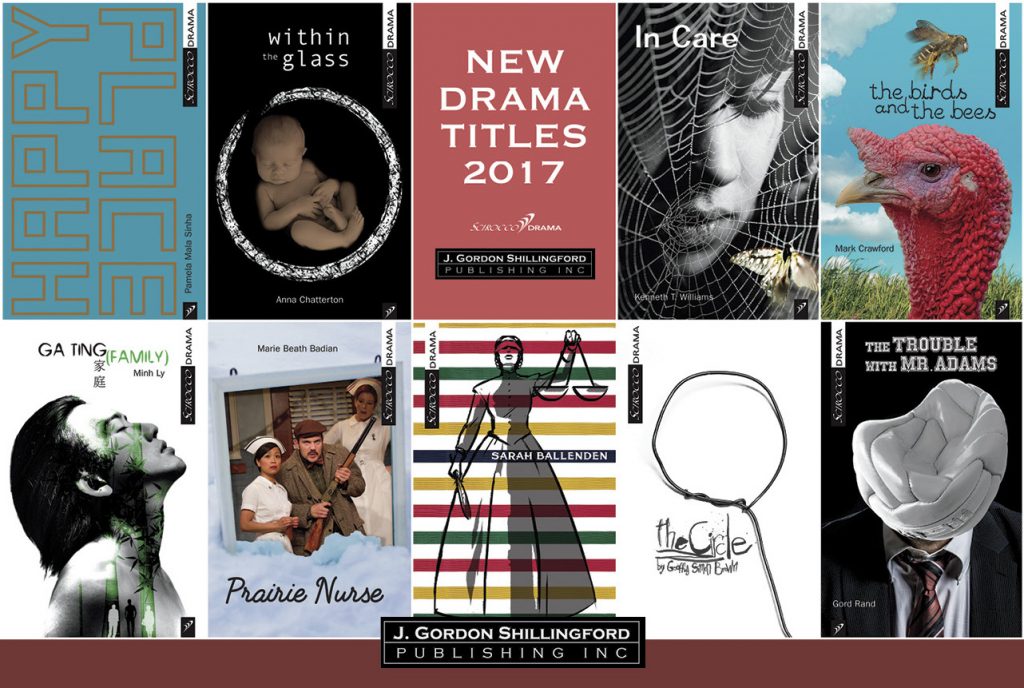 Join us for the Toronto launch of 9 Scirocco plays.

The Ex-Boyfriend Yard Sale: A Play About the Cost of Love

The Orchard (After Chekhov)

Your cart is empty.